How Growth Hacking Can Grow Your Startup How Growth Hacking Can Grow Your Startup

Growth hacking is one of those careers which did not exist a decade ago. It has become a job description for some companies most of which are start-ups. What is growth hacking though?

A growth hacker is a person whose true north is growth. The sole purpose of growth hacking is to grow the number of users for a particular product by coming up with ‘hacks’.

For example, when Dropbox launched their service, they offered to give both you and your friend 500 MB, if they sign up. This resulted in people sharing the product everywhere with their friends, making it go viral.

Technically speaking, growth hacking involves quickly experimenting different tactics and strategies across mediums like SEO, content marketing, etc., and then identifying the most cost-effective way to grow the business. 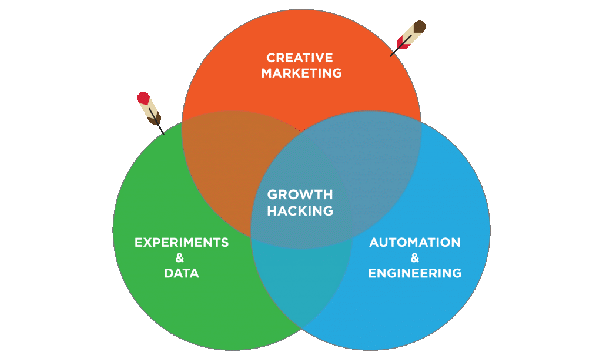 With new startups popping around the world, growth hacking is becoming popular among them, primarily because not many startups have money, and growth hacking gives a low-cost way to get the first bunch of customers.

There are a bunch of advantages of using growth hacking for startups. Firstly, growth hacking gives startups the opportunity to capture the initial batch of customers. When Airbnb initially launched, they created an API for craigslist, so that people that were posting their houses for rent over there, can be marketed on Airbnb. This way whenever someone came to Airbnb, they already had a bunch of pictures and posts up.

Another benefit of using growth hacks is that it helps you incorporate customer feedback and adapt the product continuously to keep the user engaged and satisfied. For example, Twitter was able to get a bunch of users to sign up because of their marketing. However, after signing up, not many people were engaging with the platform. So Twitter’s team analyzed the behavior of the most engaged users and saw how they used the platform. They then decided to change the entire user interface, which became the basis for future growth of Twitter.

The third benefit of growth hacking is the viral nature of it. Most of the growth hacks that we discussed involved tweaking the product or service to make it go viral and get it into the hands of as many users as possible. This increased level of awareness helps in creating a brand and results in more growth in the future. For example, when Uber launched its’ service, it copied the same growth hack of Dropbox and gave everyone who shared and signed up a credit of $25. This viral growth resulted in getting featured in newspapers, and tv shows, causing more people to sign up.

Growth hacking is a relatively new buzzword, and for every startup which plans on taking off, the advice that the concept offers is always worth the effort, and when used to the right end, the idea could help achieve exceptional growth. The trick is always to be experimenting and gathering feedback from the market.